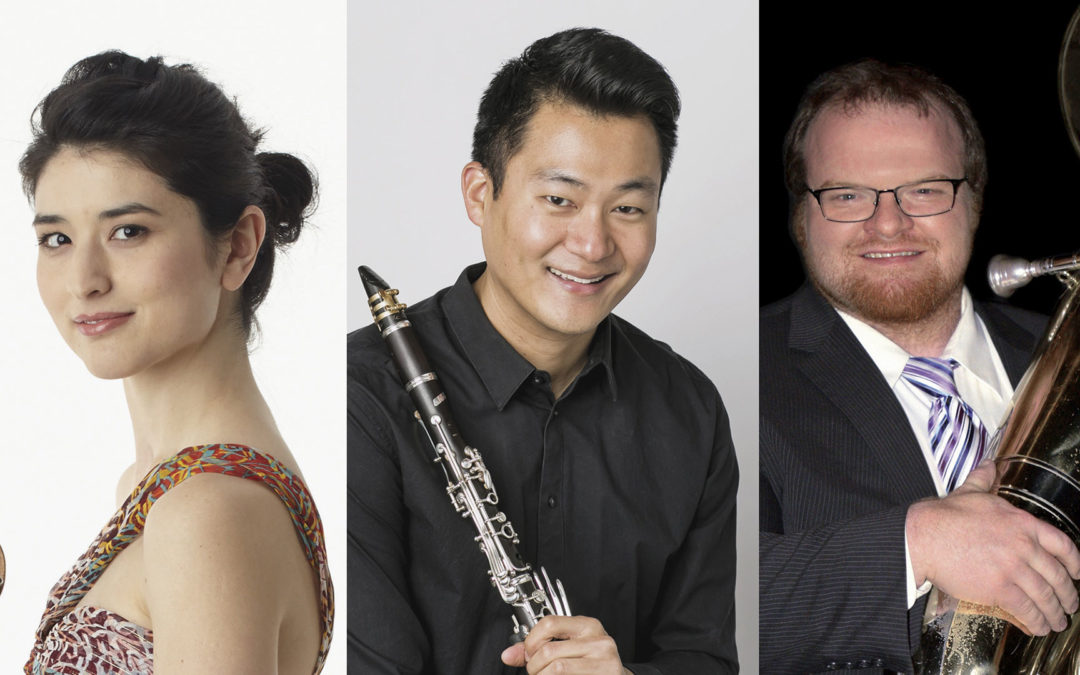 The MSO begins with a performance of Schubert’s Symphony No. 8, Unfinished, before the featured artists appear: Violinist Naha Greenholtz performs Prokofiev’s Concerto No. 2 for Violin, Clarinetist JJ Koh follows with Debussy’s Rhapsody for Clarinet and Orchestra, and Tubist Joshua Biere concludes with Vaughan Williams’ Concerto for Tuba and Orchestra. The program finishes with Gershwin’s An American in Paris.

Maestro John DeMain speaks to his passion for the concerts. “Our March concerts shine the spotlight on our own brilliant musicians that make up the Madison Symphony Orchestra. It is important to me on the occasion of my 25th anniversary with the Symphony to share this celebration in a special way with these artists, who make my musical life such a pleasure. I decided to feature three of our principal players who are wonderful virtuosos as well: concertmaster Naha Greenholtz, principal clarinet JJ Koh, and principal tuba Josh Biere. These young professionals have already made an extraordinary contribution to the overall outstanding quality of our orchestra.”

Schubert began composing Symphony No. 8, Unfinished in 1822, but left the piece with only two movements despite living for six more years. It is presumed that Schubert gave the two-movement score to Josef Hüttenbrenner as a gift for his brother Anselm, the president of the Styrian Music Society in Graz. For reasons that remain unclear, the score was then shelved and not given another glance by either Schubert or Hüttenbrenner, until 1860 when the latter (finally) realized he possessed a gem. He approached conductor Johann von Herbeck with assurances of a “treasure” on par “with any of Beethoven’s,” and Schubert’s Unfinished Symphony had its premiere in 1865.

About his Violin Concerto No. 2, Prokofiev reflects the work “was written in the most diverse countries: the main subject of the first movement was written in Paris, the first theme of the second movement in Voronezh, the instrumentation was completed in Baku, and the premiere took place in December of 1935 in Madrid.” The concerto is more conventional than the composer’s early bold compositions. It starts off with a simple violin melody and recalls traditional Russian folk music. The graceful violin melody flows throughout the entire second movement and the third movement’s theme has a taste of Spain, complete with the clacking of castanets.

Composed between December 1909 and January 1910, Claude Debussy’s Rhapsody for Clarinet and Orchestra was dedicated to the French clarinet professor Prosper Mimart and was originally written as one of two test pieces for the clarinet examinations at the Paris Conservatoire. The piece is described as dreamily slow at the start, followed by a duple meter section that moves the music along until the joyous final section.

Concerto for Tuba and Orchestra by Ralph Vaughan Williams was written in 1953-54 to mark the 50th anniversary of the London Symphony Orchestra.

An American in Paris is one of George Gershwin’s most well-known and most-beloved compositions. Written in 1928, it evokes the sights and energy of the French capital in the 1920s. As Gershwin explains, the work’s purpose is to “portray the impressions of an American visitor in Paris as he strolls about the city, listens to the various street noises, and absorbs the French atmosphere.”

JJ Koh joined the Madison Symphony Orchestra as principal clarinetist in 2016. In addition, he holds a position with the Milwaukee Symphony Orchestra, and Wisconsin Chamber Orchestra. Prior to joining the MSO, Mr. Koh was a member of the Civic Orchestra of Chicago. Mr. Koh is a founding member of the Arundo Donax Reed Quintet, a winner of the Fischoff National Chamber Music Competition. As principal clarinetist of KammerMahler, Mr. Koh participated in a world premier recording project, which featured chamber versions of Gustav Mahler’s Fourth and Ninth Symphonies.

Josh Biere joined the Madison Symphony Orchestra as principal tubist in 2013. He also holds the principal tuba chair with the Kenosha Symphony and regularly performs with the new Chicago Composers Orchestra. Mr. Biere has also performed at the Grant Park Music Festival (Chicago), and with the St. Paul Chamber Orchestra. An established chamber musician, Mr. Biere is also a highly sought-after clinician and teacher, maintaining a studio of well over thirty-five tuba and euphonium students.

The lobby opens 90 minutes prior to each concert. One hour before each performance, John DeMain will lead a 30-minute Prelude Discussion in Overture Hall to enhance concertgoers’ understanding and listening experience. It is free to ticketholders. The Symphony recommends concert attendees arrive early for each performance to make sure they have time to pass through Overture Center’s security stations, and so they can experience the Prelude Discussion. Program notes for the concerts are available online: http://bit.ly/mar2019programnotes

Presenting sponsorship provided by the Kelly Family Foundation. Major funding provided by Madison Magazine, Louise and Ernest Borden, Scott and Janet Cabot, and Elaine and Nicholas Mischler. Additional funding provided by von Briesen & Roper, s.c., and the Wisconsin Arts Board with funds from the State of Wisconsin and the National Endowment for the Arts.